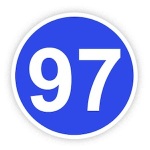 Salon97 offers classical music with attitude for the other 97% of people who don't yet listen to it— until they meet Cariwyl.

Cariwyl Hebert is putting the cool back into classical music and is changing the way people listen to it. If you’re lucky enough to attend Salon97, her monthly listening parties in San Francisco, she’ll give you a cupcake and a glass of wine. This month, she offered hot dogs and root beer floats, instead, for a special program dedicated to celebrating American composers.

Root beer floats and classical music? Yes. Salon97 is serious only in that it is seriously fun. Cariwyl encouraged “incessant flag-waving” for this particular event. I took her word and wore my most comfortable pair of blue jeans, frayed Lucky’s, and flip-flops. I could do patriotic. I like good hot dogs. I love root beer floats. But could I do classical music and stay comfortable? 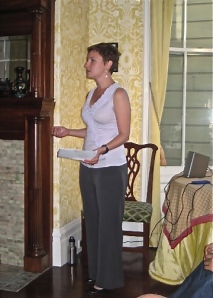 Cariwyl Hebert, founder of Salon97: educating, entertaining and sharing her passion for classical music since 2008.

“Wine helps,” Cariwyl said about how she’s been helping to make this approachable to people like me, those of us intimidated by anything “classic” that isn’t referring to a John Hughes film.

I’d never been to a listening salon and found myself both nervous and eager to attend last week’s annual party in July. Why the focus on American composers? “Because American composers are amazing and too many people don’t know it yet,” Cariwyl explained.As much as Cariwyl assured me I didn’t need to know a thing about classical music to enjoy myself at Salon97, I wondered about the crowd and worried.

My mind ran amok. Do 97ers stand around stiffly discussing the choices of musical symbolism? Was it like a wine tasting where I’d be encouraged to identify Chopin-inspired ditties? Could I even use a word like ditty around classical music aficionados? Whoa, was all I could think.

So yes, of course, I was intimidated, even though I can honestly say I’m not the 97 percent of people who don’t yet listen to classical music. I actually love it. I listen to it a lot, most often in the car. It keeps me calm on the road, helps me focus when I’m cooking. I played it all the time when I was pregnant with the hope that my baby might be better than me at math, as if classical music has the power to trip genetics. Who knows? It ignited a love affair with Einaudi recently. 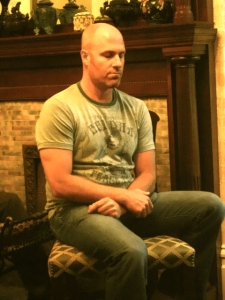 Classical music for the urban hipster? A drummer listens with rapt attention to Berkeley based composer John Adams' "Chairman Dances: Foxtrot for Orchestra."

Though I like classical music, I have zero confidence in my ability to discuss what I’m hearing. The closest articulation is about classical film soundtracks that actually help when I write, and I’ve looped a song for as long as eight hours to work on a particular scene. Surely I had the stamina to last through Cariwyl’s three selections—and stay through dessert.

The fact that I found parking across the street of the venue was an omen of good things. Cariwyl scored with her host, Murrey, a friend who generously offered her classic Victorian house to 26 strangers, all for the benefit of spreading the love of music neglected and misunderstood by the general population for too long. It was time to join Cariwyl’s mission, to listen up and take heart. 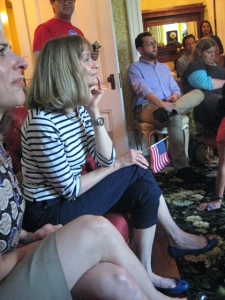 It's easy and even fun to listen to classical music with Cariwyl Hebert as your guide.

We crowded the chairs and floor of Murrey’s front parlor, an antique showcase, perfect for listening to the works of American composers John Adams, Virgil Thomson, and George Gershwin. The format was simple and straightforward: introduction, listening, discussion. Coughing was encouraged along with flag waving and breaks for more wine and cheese.

Cariwyl started the salon with “Chairman Dances, Foxtrot for Orchestra” performed by: San Francisco Symphony, directed by Edo de Waart, composed by John Adams, a Berkeley based musician. “John Adams gave me tendinitis!” Mike Williams confessed to the crowd. Apparently, he was a fabulous flutist who Cariwyl met at San Francisco Music Conservatory.

I was eager to hear John Adams’ piece, but terrified to discuss it now that someone among us was a professional musician. I cowered in the corner hoping nobody would call on me. I had mixed my patriotism with a big dose of paranoia. This was a party. Not a blue book exam. There would be no tests involved. Only taste tests.

I sat, listened and waited. Hands shot up. The crowd spoke. I took notes, astonished to hear words like “really fun”  “amazing” “spectacular” “purely American” “classical and melodic at the same time, with a lush melodic middle.” I was relieved. Someone had spoken about John Adams’ piece as if it was an ice cream sandwich. I could relate to that. I was feeling warmed up. My own internal commentary had included some of the same words. Could I actually participate here? 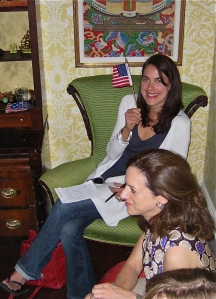 That's me, the author, overcoming my fear of classical music...and loving every minute!

Apparently Cariwyl had chosen the John Adams’ piece because she wanted to feature someone local. “It jumped out at me. I wanted someone who would grab your ear. This is sort of crowd-pleaser-ish,” she said and smiled with a glimmer in her eye that says, trust me, this is really fun.

Cariwyl has brought Salon97 to backyard patios, museums and libraries in San Francisco, and July 26, she travels across the country to WQXR in New York City, the country’s largest classical music station. To say she is elated is a gross understatement. She knows what she’s doing. She knows how to please a crowd with classical music. Listen up South by Southwest. There’s room and reverence among the hip for classical music out there.

Adams grabbed my ear and pleased me. I was bouncing my flip flops along with the catchy music but the jury was out for my ability to articulate the experience. I’d get two more tries. Next up: “At the Beach” by Virgil Thomson performed by: Yvar Mikhashoff, piano; David Kuehn, trumpet.

Cariwyl’s introduction to Virgil Thomson peppered us with compelling trivia. Thomson’s film score for “Louisiana Story” was the only film score to win a Pulitzer Prize. “Makes you want to go out and see the film!” said someone sitting cross-legged on the floor. Yes, I was excited to update my Netflix queue, too, but my internal dialogue was processing the fact that there is a Pulitzer Prize for musical compositions. A Pulitzer? My God, was a complete rube or what? 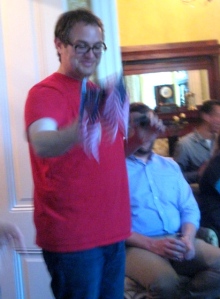 Got a flag? Wave it. Grab a hot dog. Eat it. Kevin Smokler dispenses flags for patriotic listeners at Salon97. The only rule? Have fun.

Apparently, Cariwyl was testing all of us and the discussion heated up. Some people laughed during Thomson’s piece. The music was funny and playful, but that’s about all I could safely say.

Some people found it odd that the piano and trumpet were paired together and not called jazz. A few zingers whizzed around the parlor, smacking us with sheer candidness. “Modern version of chamber music”  “boring and weird” “simple piece—not a lot of virtuosity” “what about the high note at the end?” (laughter) “felt like an adolescent boy with his music teacher” (referring to the “antagonist” trumpet and “protagonist” piano part). This was no ice cream sandwich.

Even Cariwyl freely admitted, “Would I wake up and say I’d listen to “At the Beach”? No.” But in her admission, I felt strangely at ease, both inspired and humbled by the impassioned discussion.

Here I was with a group of people who had never heard this music. We were suddenly related, each of us willing to push our comfort zones, engage with strangers and expand our minds.

Simply put, we were learning something new. And we were having fun doing it, hot dog in hand.

Someone even mentioned “counterpoint,” referring to how two more lines of music relate when played together. Examples cited were Bach and Gregorian chants. Apparently there was a lot of counterpoint going in Virgil Thomson’s piece and it stirred up the ranters in the room. Fun.

I had no idea that George Gershwin died so young, at 38 from a brain tumor. He had just arrived in Hollywood with his brother to score films. His whole life was in front of him and he had so much more music inside him. We listened with awe, reverence and joy. Cariwyl took a seat on the floor, beaming, completely absorbed in her element and sharing her greatest love. 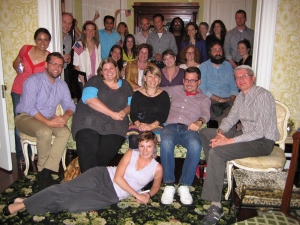 You can guess the reaction of the crowd to “Rhapsody in Blue.” Unanimously positive. “Yay” “Such an iconic cornerstone piece.” “Fantasia image struck in my head.” “Damn United.” (referring to the airline’s musical theme) “Embodies New York.”  “Piano composer of all time.”

One person said it was the first time they had heard the piece in its entirety in years, as it was for most of the 97ers that night. He was visibly touched and that meant a lot to Cariwyl. “I love when I see the light bulb go off in listeners,” she told me weeks ago over lunch.

As we sat there and the music washed over us, as Gershwin’s pieces have the power to do, especially “Rhapsody in Blue,” it struck me how meditative listening to music can be, how much more I want to sit down and listen to music that I don’t normally put on my I-Pod. By the end of the night, I developed a relationship with each of these pieces and yes, I’d say it was intimate.

I swear my heart rate had dropped in the 90 minutes I’d been in that room. I felt calm, at ease, peaceful. Was this musical yoga? Something was happening at Salon97 to enrich the community. Cariwyl Hebert was bringing a little levity and happiness to others one classical piece at a time.

To learn more about Salon97 and maybe even participate, click here: Salon97.